Josephus Flavius and the Eastern Borders of Roman Europe

І. Pompey and the Jewish Sabbath

The 63 B.C. the famous Roman general Pompey took by force the city of Jerusalem and entered the Holy of the Holies in the Temple: which, as everybody then knew, was not permitted not only to pagans as Pompey himself, but to anybody – except of the High Priest once in the year. Pompey won easily one or two battles against a Judean army, but was stopped by the mighty wall around this part of Jerusalem, where was the Temple. According to most historians of the time – including the best informed among them, Josephus – Pompey was helped by the condition, that the Jews did not fight in the day of Sabbath.
Josephus tells us about this in the following way:
And indeed it was a hard thing to fill up that valley, by reason of its immense depth, especially as the Jews used all the means possible to repel them from their superior situation; nor had the Romans succeeded in their endeavours, had not Pompey taken notice of the seventh day, on which the Jews abstain from all sorts of work on a religious account and raised his bank, but restrained his soldiers from fighting on those days; for the Jews only acted defensively on Sabbath days. But as soon as Pompey had filled up the valley, he erected high towers upon the bank, and brought those engines, which they had fetched from Tyre near to the wall, and tried to batter it down… but the towers on this side of the city made very great resistance, and were indeed extraordinary both for largeness and magnificence (Josephus, The Wars Of The Jews, I, 7, 3)
Besides, Pompey had been amazed by the perseverance and imperturbability, with which the Jewish priests had performed the worship service, although they had been directly attacked. Even when they had been beaten to death, they hadn’t ceased to execute the demanded sacred deeds with the greatest punctuality, precisely in the same manner, in which they would have done it in peaceful time.
Josephus says the following:
Now here it was that, upon the many hardships which the Romans underwent, Pompey could not but admire not only at the other instances of the Jews' fortitude, but especially that they did not at all intermit their religious services, even when they were encompassed with darts on all sides; for, as if the city were in full peace, their daily sacrifices and purifications, and every branch of their religious worship, was still performed to God with the utmost exactness. Nor indeed when the temple was actually taken, and they were every day slain about the altar, did they leave off the instances of their Divine worship that were appointed by their law; for it was in the third month of the siege before the Romans could even with great difficulty overthrow one of the towers, and get into the temple (Josephus, The Wars Of The Jews, I, 7, 4).
The Jews had become famous with this way of self-sacrifice centuries before that. So, one of the Macedonian rulers of Egypt had taken Jerusalem in the beginning of the third century B.C., taking advantage, like Pompey, of the Sabbath.
Now it came to pass, that when Ptolemy, the son of Lagus, came into this city with his army, that these men, in observing this mad custom of theirs, instead of guarding the city, suffered their country to submit itself to a bitter lord; and their law was openly proved to have commanded a foolish practice. This accident taught all other men but the Jews to disregard such dreams as these were, and not to follow the like idle suggestions delivered as a law, when, in such uncertainty of human reasonings, they are at a loss what they should do (Agatharchides, a pagan historian cited by Josephus in Against Apion, I, 22).


ІІ. Jerusalem and the boundaries of pagan Europe

Pompey had captured Jerusalem, but treated the population mercifully and did not sack the treasures in the Temple. 133 years later Titus not only had conquered the town, but also burnt the Temple and murdered the majority of its population. Half a century after that Hadrian built at this place a huge pagan temple and even changed the name of the city – he called it Elia. This had never happened to any of the cities, with which Rome had conflicts. Carthago, one hundred years after its demolition, had been rebuilt by the Romans themselves – and with the same name. It is obvious, that Jerusalem had been considered as an irreconcilable enemy – a city, which cannot be associated, but only deleted.
These events might serve as the basis of reflection on the question: where are the boundaries of Roman Europe. The expansion of Rome, as well as of the Hellenistic kingdoms, governed by the successors of Alexander, was marked by the acceptance of its deities. Imperial Rome was there, where was erected the statues of her emperors. The Jews probably never would rebelled – neither against the emperorors nor before them against Hellenistic kings as Antioch the IV – if the state of the conquerors had not menaced their divine service. But it had been inevitable the pagan state to be a threat, because the Roman religion, especially after the deification of the emperors from Caesar onwards, is a cult to the Roman state, and the Jews refused to serve other gods besides their Lord. So, thus, this conflict, which at first glance seems to be “only religious”, turns out to be a political one, as well. Because, the essence of the worship of the Roman deities is the welfare of the state, and therefore the one, who refuses to worship them, opposes the state. According to the Jews, however, a state should exist in order to protect the divine service; and a state, which cannot secure the service to the one God, is useless. That’s why the Romans as statesmen inevitably will persecute a worship, which rejects their deities, and the Jews will reject a state, which imposes to them a cult, incompatible with their worship.
After the demolition of the Temple in front of the Roman state emerges a problem, in a certain degree similar to the previous one – the problem with the Christians. From the correspondence between Pliny the Younger and the emperor Trajan is evident that the Christians had been persecuted mainly as a political community, although they hadn’t perceived themselves like that. The reason had been the same – the refusal to participate in the state cult. Thus the emperor had been confronted by people, who despite of the fact that they are Roman citizens, actually live in the empire as its opponents – because they do not obey and refuse to obey the orders of the state, in the cases when these commands refer to a matter of faith.
How this conflict could be resolved? Either the state had to give up its own cult, or the Christians to be exterminated – as believers or physically. The first had happened and so the Roman state had disappeared as pagan state. Thus, the policy of the emperors – external and internal – of imposing the state cult forcibly had been in vain; the cult had disappeared.


ІІІ. Pope Benedict XVI on the spiritual situation of our times

Recently, (10 days ago in Paris) pope Benedict XVI, made the following public statement:
The word 'idol' comes from the Greek and means 'image,' 'figure,' 'representation,' but also 'ghost,' 'phantom,' 'vain appearance.' An idol is a delusion, for it turns its worshipper away from reality and places him in the kingdom of mere appearances."
"Now," the Pope asked, "is this not a temptation in our own day - the only one we can act upon effectively? The temptation to idolize a past that no longer exists, forgetting its shortcomings; the temptation to idolize a future which does not yet exist, in the belief that, by his efforts alone, man can bring about the kingdom of eternal joy on earth!" In the same way, "have not money, the thirst for possessions, for power and even for knowledge, diverted man from his true destiny?" (Pope: Shun the worship of modern idols http://www.catholicnewsagency.com/new.php?n=13794)
On my part, personally, without being a Roman Catholic, I could agree with the words of the pope. The European Union does not have any clear politics on the question of the religion. It is considered, that religion is just “one of the many problems” and maybe not the most important one, and moreover, that it is “a personal matter of everybody”.
However, it is possible religion to abide in a place, where it is imperceptible for the majority of the people. The head of the Catholic Church already says that today the attitude of the people to the market is in fact a religious attitude. The supreme values are the welfare, conceived as the satisfaction of all kinds of desires in one’s personal life and the equity in front of the law.
But the same values had been the pride of Rome, as well. Its deities had been the deities of the well-being and success. The myths narrate that they are creatures, who try to satisfy their own bodily desires and striving for power and honour. Today the boundaries of Europe again reach to the limit, from where on the satisfaction of various desires in one’s personal life is not a supreme value. Beyond this limit, however, occur changes in the public life, as well.

The aim of this text is to pay attention to the indifference of the European leaders towards the question of religion in the European union. In fact, there is an implicit hostility against the view, which claims that the goods of this world are temporary and therefore insignificant. The example of the Roman Empire shows that neither the welfare, nor the violence could resist a faith, which points to the supreme good as external from this world.
Contemporary Europe, deprived from a religion of its own, will be left open to the increasing pressure from Islam – and this will be not so much external, as internal pressure. This may lead to violence, probably exerted by xenophobic groups in the beginning, but tolerated by some governments. Then this might lead to the break of the union. Then the leadership will be taken either by professed neo-pagans, similar to the Italian and German rulers 70 years ago, either by countries, whose rulers will be the first to declare, that the state exist for the sake of the religion.
Posted by Николай Гочев at 8:43 PM No comments: 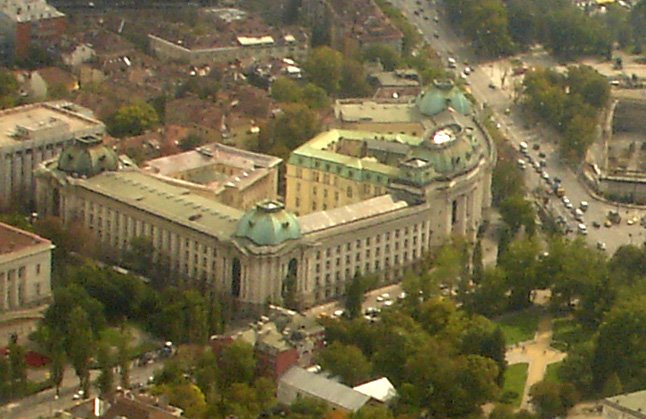